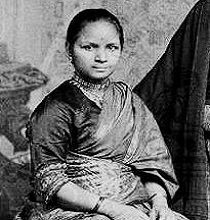 Dr.Anandibai Goparao Joshi was one of the first Indian and first south Asian female physicians trained in western medicine. She was also the first Indian woman on American soil to receive a professional education and graduate in medical science.

Yamuna Joshi was born on 31st March 1865 into a wealthy Hindu Brahmin family in the town of Kalyan in the state of Maharashtra, India.  Her family were an orthodox wealthy land owners.  Her family lost their wealth and she was married at the age of nine to an older widower, Gopalrao, who was 20 years older than her.   As was (and continues to be) the custom her name was changed after marriage and she was called Anandibai.  Her husband, who worked as a postal clerk was a passionate supporter of womenâ€™s education and married her on condition that he would educate her.

Gopalrao started teaching Anandibai to read and speak English.  Gopal Hari Deshmukh was a social reformer from Maharashtra who penned numerous articles on social reform that came to be known in Marathi literature as Lokhitawadinchi Shatapatre.  Gopalrao was inspired by this work and regarded English to be more important and influential even though Sanskrit was the common language spoken among Brahmins.  Anandibai proved to be an excellent student who made rapid progress.  She delivered a boy child when she was only fourteen years old, but the child survived for just 10 days owing to lack of medical care.  This inspired her to pursue a medical education.

Striving for a Medical Career

Gopalrao tried to get admission from many Universities in America, but most of the propositions offered to them demanded the couple to convert their religion to Christianity that was not acceptable by the orthodox Brahmin couple. Theodicia Carpenter of Roselle, New Jersey, came to know about their story which was published in the Missionary Review. She was moved by it and impressed by Anandibaiâ€™s desire to study medicine and Gopalraoâ€™s support for his wife. This led to the exchange of many letters between Mrs.Carpenter and Anandibai.

Anandibai soon started to consider Mrs.Carpenter as her aunt and started discussing many issues including early marriages, womenâ€™s health, Hindu religion and status of the women in India. She also discussed her views on how the â€˜sutiâ€™ ban should be enforced in case of child marriages as well.

Anandibaiâ€™s health had been affected over the years with occasional fever and weakness for which Mrs. Carpenter sent medicines from America. Finally, it was in the year 1883, when Gopalrao had been posted to Serampore in the state of West Bengal, that he decided to accept the gracious offer extended by Mrs. Carpenter to provide accommodation for Anandibai in order to pursue her education. This decision was condemned in the orthodox Brahmin society and the couple were subjected to harassment; people threw stones and cow dung at the family.

Anandibai addressed the community at Serampore College Hall, explaining her decision to go to America for obtaining a medical degree. She convinced people by sharing her personal tragedy of losing her son. She stressed the need for Hindu female doctors in India and also conveyed her dream about opening a medical college for women in India after her return from America. She pledged that she would not forget her Hindu Brahmin roots and would not convert to Christianity.  Her speech at Serampore received publicity and financial contributions came from all over India, including Rs 200 from the  Viceroy of India, Marquess of Ripon.

Medical Education in the United States of America

Gopalrao stayed back in India and sent his wife to America, escorted by American missionary women. They made the long journey from Calcutta to New York by ship. The Carpenterâ€™s received and took care of Anandibai as soon as she arrived on American soil. Anandibai found many things to be strange in the new country but she was accepted by Mrs. Carpenter as her own daughter.

Anandibai wrote to the Medical College of Pennsylvania (which was the first womenâ€™s medical programme in the world) asking for admittance into their medical programme. The Superintendent and Secretary of the College were impressed by her owing to the hardships that she endured in order to reach USA for her degree.  An extract from the letter that she wrote to the University states.

â€œ[The] determination which has brought me to your country against the combined opposition of my friends and caste ought to go a long way towards helping me to carry out the purpose for which I came, i.e. to render to my poor suffering country women the true medical aid they so sadly stand in need of and which they would rather die than accept at the hands of a male physician. The voice of humanity is with me and I must not fail. My soul is moved to help the many who cannot help themselvesâ€

The University immediately accepted her application and enrolled her into their medical programme.  She was also offered a scholarship of $600 for the years that she would be there.  Anandibai finally began her medical education at the age of 19.

Being a Maharashtrian by birth, Anadibai found clothing to be the first problem in the USA.  She used to wear sarees that exposed her waist and calves. As the winter became colder, she could not handle the cold temperature without wearing western attire. After much contemplation and even after remembering the famous Bhagavad Gita which stated the body is just a covering for the soul that cannot be corrupted, she decided to wear her saree in Gujarati style which could cover her waist and calves.

Her health started declining because of the cold weather as the room provided by the college did not have effective heating. Two years into the medical programme, her health took a turn for the worse as she experienced sudden spells of fainting and high temperature along with frequent coughs.

Anandibaiâ€™s thesis was entitled â€˜Obstetrics among the Aryan Hindoosâ€™ and she obtained her MD degree on 11 March, 1886.  Her husband, Gopalrao, and Pandita Ramabai (social reformer and education pioneer), attended her graduation.  As the first woman doctor of India Dr Anandibai received a standing ovation at the ceremony. On her graduation, Queen Victoria sent a congratulatory message for her achievement.

Even though she received much praise and appreciation for her achievement, Dr.Anandibaiâ€™s health steadily grew worse. She was diagnosed with tuberculosis but the disease had not yet reached her lungs.  She decided to return back to India.

During late 1886, Dr.Anandibai returned home and received a heroâ€™s welcome. The princely state of Kolhapur appointed her as the Lady Doctor to take charge of the female ward at Albert Edward Hospital.

The journey back home took a further toll on her health as the duty doctors on the ship refused to treat a â€˜brownâ€™ woman. Even after reaching India she did not receive any proper treatment.  A renowned Ayurvedic specialist in Poona refused to treat her since he believed that she had crossed the boundaries of the society!

Dr.Anandibai succumbed to tuberculosis and died on 26th February 1887 just before her twenty-second birthday.  Her death was mourned throughout India. Her ashes were sent to Mrs. Carpenter in the USA and were placed in her family cemetery in Poughkeepsie, New York.

Owing to her untimely dealth, Dr. Anandibai could not put to use her medical training.  However, she left a mark and made a huge contribution to a much better and bolder, India.  Dr. Anandibai took the bold step to fight and go against the societal norms of the day to become a doctor with the support of her husband.  Gopalrao never let her quit and always inspired her to reach her goals.  His support for womenâ€™s education and empowerment was remarkable for the time he lived in.

Anandibaiâ€™s opinions in the letters to Mrs. Carpenter allowed the world to understand how amazing she was.  She is a true inspiration to all young girls, as she made everyone believe that dreams and goals can be achieved with determination and endurance. To this day, she inspires many young girls hailing from India to believe that whatever the circumstances, nobodyâ€™s dreams are unachievable.  Anandibai today would definitely be considered a feminist!